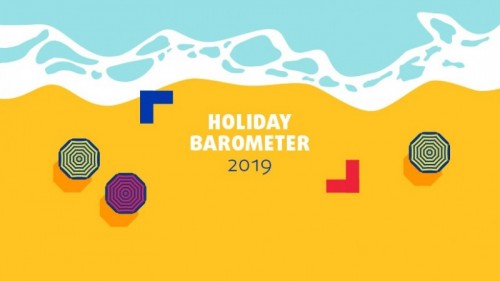 Paris, 4th June 2019 – Europ Assistance today released the findings of its 19th Annual Holiday Barometer, conducted by Ipsos, which looks at the summer holiday plans and travel preferences of respondents in twelve countries across the globe. This year's survey found that the number of Europeans (63%) and Americans (68%) who indicated that they would be going on holiday this summer held stable (64% and 68% respectively in 2018). Brazil, like the US, also held steady with 68 percent of respondents indicating they have summer travel plans (same as the year prior).

There were several interesting differences when it came to responses from Europeans, Americans, and Brazilians this year – the first being related to budget. In Europe, budgets for travel increased by 3 percent in 2019 to an average spend of €2,019, a number that increases to €2,099 when looking only at counties that make up the Euro Zone (excludes the United Kingdom, Switzerland, and Poland). The increase in the European budget this year is mainly driven by France, Spain, and Germany with respondents from each country indicating that their travel budget increased by 10, 8, and 4 percent respectively. Meanwhile budgets in the United States dropped by almost 10 percent from the year prior to $2,373. Brazil, Belgium, and the United Kingdom all saw 3-5 percent decreases in their travel budgets from the year prior as well.

This year’s Holiday Barometer also found that Americans (28%) and Brazilians (36%) are more interested in atypical activities like staying at a local’s home compared to Europeans (27%). While respondents from France, Spain, Poland, and Portugal were the most interested in these new kinds of activities amongst Europeans, respondents from the U.S. are the most adventurous when it comes to nature-based activities – with 46 percent indicating that they will go camping, versus 28 percent of Europeans and 22 percent of Brazilians. Brazilians were the most adventurous when it came to atypical lodging activities like opening their own homes to travelers (19%) and swapping homes (14%). Conversely, just 8 percent of Europeans and 7 percent of Americans will have travelers stay with them and just 6 percent (Europeans) and 5 percent (U.S.) will do a home swap.

Antoine Parisi, CEO of Europ Assistance: “This year we’ve seen that overall the situation globally is stable, the summer holiday remains an important part of life in Europe, the US and Brazil. It’s interesting to understand the differences in budget, one of the stand-out findings of this year’s survey. Europeans are prepared to spend more, 3% more in 2019 driven by France, Spain and Germany. As an assistance provider, it’s important we monitor both the preferences and concerns of our customers, so If a problem arises, we are ready to deploy our resources to bring them from distress to relief anytime, anywhere.”

The 2019 edition of the Cyber Barometer from Europ Assistance and Ipsos was conducted in 12 countries including the United States, United Kingdom, Italy, France, Spain, Switzerland, Germany, Austria, Portugal, Belgium, Poland, and Brazil. In each country, 1,000 consumers aged 18 years and older (aged 16 and up in Brazil) took part in an online questionnaire. The survey was conducted between March and April 2019 and investigated consumer holiday plans and travel preferences.