Fighting with breast cancer: our colleagues share their own stories

Fighting with breast cancer: our colleagues share their own stories

Each year, 58,000 new cases of breast cancer are diagnosed in France, resulting in 12,000 deaths. In this #PinkOctober month, Virginie, Anne, Nadia and Catherine, four employees of Europ Assistance, shared their stories with their colleagues about their fight against #cancer, about their remission, and about their relationship to work, during and after illness. Their attitudes about continuing to work part-time during treatment differ, but they all agreed on the difficulties of the post-treatment period and the doubt it brings. These are often taboo topics in the workplace, . They dare speaking about it with their own words and based on their own experience. Extracts.

"Keeping on with my professional life helped me a lot ... but each person has a different situation and a different apprehension of the disease"

When the activity allows it (especially through remote working), should one continue a partial professional activity during the treatment period? The situations differ: those who preferred taking time to focuson themselves "in order to better prepare for the fight" and those who chose to “keep one foot in real life to avoid thinking about cancer all the time".

“My body made the choice not to go back to work, because I had just given birth..." says Nadia, who had to spend almost two years away from work. "Illness stress and daily stress: I didn't feel like I could overcome both" says Anne, a manager who felt concerned about not being able to support her employees. "I preferred taking time for myself, to better put myself in commando mode" she said.

Confronted with the same situation, Virginie (see her testimony here) chose to work as much as her body allowed her: “In order to stay into real life, and to avoid thinking about cancer all the time… because cancer eats you all day long, and you feel you cannot control anything (…) Keeping on working helped me being patient… which is not my first quality! ". Same approach for Catherine, who alternated fifteen days of work on site and fifteen days of rest, having one chemotherapy session every month. Mother of two teenagers, she insists on the message she wanted to bring to those around her by continuing to work: "I wanted to work again to help changing other people’s perception of the disease: having a cancer shall not mean you are fit for nothing! Of course, it impacts our faculties, we feel tired ... but I held on and it helped me. And if that helped those around me to better understand what cancer is and how one could move forward despite everything, I would have won my bet".

"I was supported from the beginning of the treatment to the end of it, and so was my family. Hardest times came after ... - Me too!"

Five-year remission rate for breast cancer is now 87% in France. All of our four colleagues who came to share their stories last Friday recovered from cancer. However, despite the relief of the recovery, the post-treatment period and the return to work appear to be the most difficult moments to face.

First enemy: tiredness, leading to both loss of points of reference and self-confidence.

"Coming back to work… I had seen Social Security flyers in the waiting room talking about it, which I did not understand. I figured it out when I went back (...) to work, I was no longer the same, I felt diminished, and I suffered from loss of self-confidence. The treatments and chemo were tiring me intellectually. I had lost my points of reference: first, concentration issues, , but above all, I no longer felt I was protecting people within my team as my role as manager invites me to do". (Anne- "We imagine ourselves lost, when we see all bulk prescriptions we are given ..." (Anne)

Then it comes – more insidious – depression, that could turn into denial:

Reactions well-known to the doctors who attended the event: "some [scientific] articles start to link PTSD - post-traumatic syndrome – with what some people experience after cancer". Post-treatment prevention is fully-part of the support: “The longer work-interruption is, the more difficult the return to the workplace will be (…) In the first weeks, patients are exhausted (…) Many studies highlight this post-treatment tiredness. The only ways to reduce it are to have a regular physical activity and to gradually return to work. Recommendations that are not always well received by patients who came to see their doctor to tell them about their severe tiredness”.

“Hard” activity recovery is not however recommended: “it will be mostly better to resume gradually and part-time, even if you are not yet 100% ready, rather than waiting to be 100% ready and to resume at a 100% pace. Companies have a supporting role to play in this". 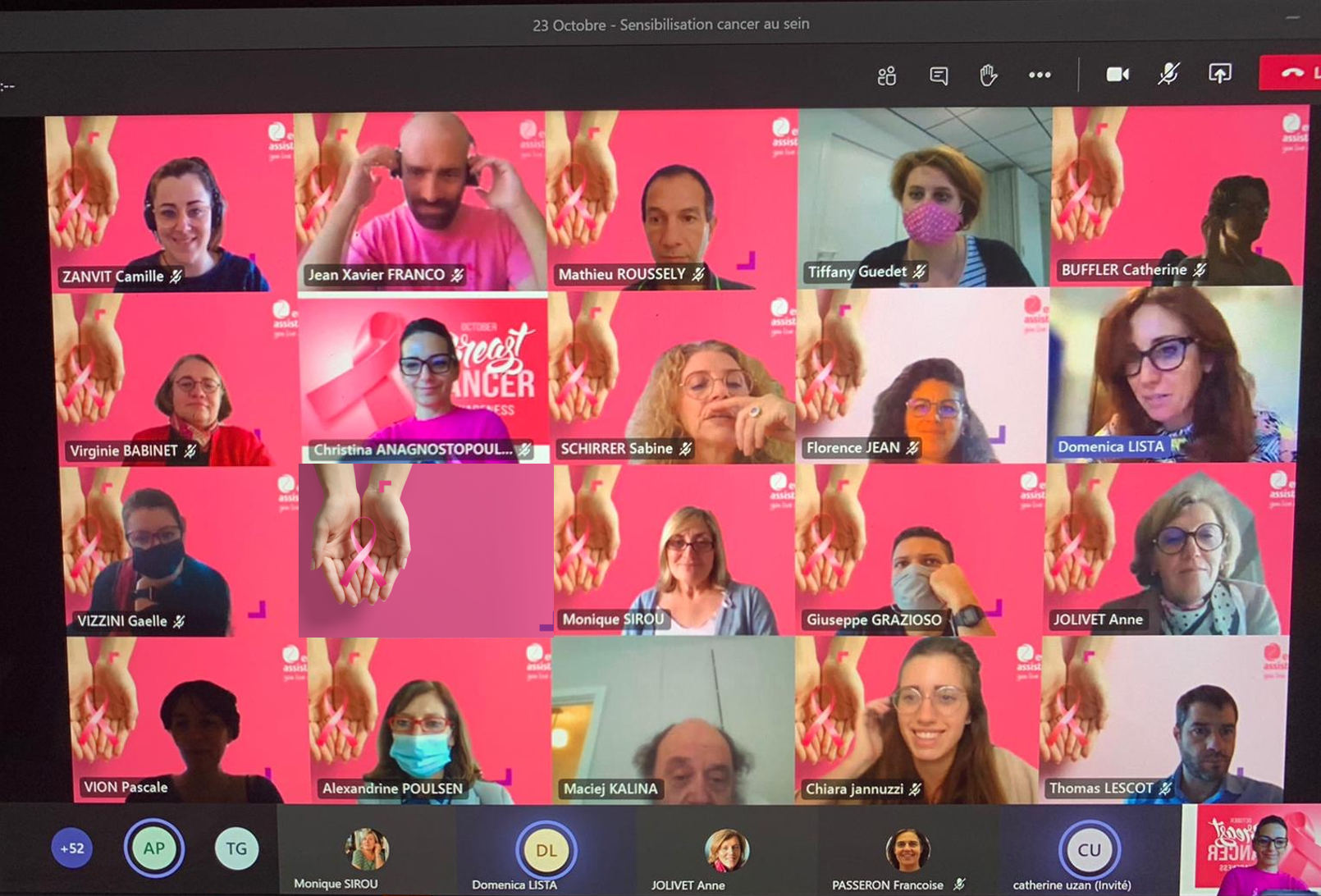 “We have this little thing in the back of our heads, and as soon as we feel a pain somewhere, we are afraid it might start again…"

A supporting role for the companies, but the major role obviously goes to relatives: "We need others and their support (...) The Mental part plays an important role in the healing process: if one is not surrounded, it can soon be complicated (…) the support from the beloved ones helps feel better and therefore helps the healing process” underlines Catherine. Psychologists support the patients "but also their children and spouse" recalls Anne. Some doctors can even recommend some patients to come to the consultations with their children - when they are old enough - to help them understand the reality of the treatments.

Doctors also recall the importance of supportive care (nutrition, psychotherapy, physical exercise with a coach, socio-aesthetics, etc.) and post-treatment support, especially when pauses between medical consultations get longer: “We have the impression of reassuring patients when we [the doctors] tell them that we will see them again in 4 months, a sign that things are getting better… but this long period without medical news worries them, and that is normal! We must not medicalize this expectation but allow patients and their families to meet the right people”.

In addition to supportive care, associations such as the League Against Cancer, as well as patient groups, are among the good stakeholders: “some recovering patients have created some kind of Fight Club where they talk about their fight against the disease and their recovery! "

And what about colleagues? Each one of our colleagues talks about the supporting messages she received from colleagues while being heiled, and about the warm welcome back received when she returned to the workplace after months of treatment. But once back at workd, some colleagues distanced themselves from them:: "We had the feeling of being a little plague! Some people no longer talked to me” confesses Virginie. "We represent a taboo that we all wish we would never live" adds Anne. "Even today, many colleagues do not dare to talk about it, it remains a real taboo" says Nadia. A silence that can make the return to the workplace even more difficult: "For those who haven't spoken about it, this represents a heavy burden" recalls a doctor. Virginie then sums up the attitude that would work well: "Be normal with us! "

This normality is even more appreciated since cancer, even when cured, never disappears completely, and continues to be feared: “We have this little thing in the back of our heads, and as soon as we feel a pain somewhere, we are afraid it starts again (…) if I could, I would have mammograms every two months! » says Virginie, before adding: “The disease has changed us (...) In a corner of our head, we say to ourselves that it can stop from one day to another (...) we must accept, for those who know us before and after that, that we are not the same person anymore”. "I have learned to be selfish!” Nadia smiles. And Anne concludes: "Above all, I have learned to live in the present moment".