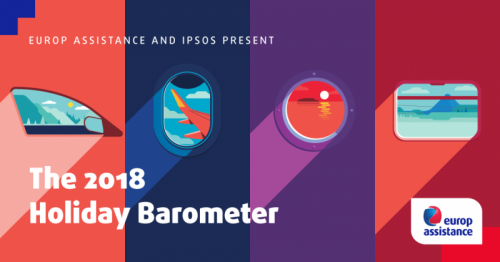 In 2018, summer plans are stable in Europe, the US and Brazil, consolidating the increase measured in 2017

After the increase observed last year, the outlook for Europeans' summer holiday plans this year remains quite high: 64% of them report they will take leave this summer, 1 point above what we measured in 2017. This increase is above the European average in France (69%, +4 pts vs. 2017), which becomes the country with the highest percentage of holidaymakers, 3 points before Austria (66%, stable compared to 2017), Switzerland (stable) and the United Kingdom (+1pt). 63% of Belgians (+3 pts), 62% of Italians (+1 pts), and 61% of Spanish (+3 pts) intend to go on holidays this summer. Poland and Portugal, both surveyed for the first time in 2018, have the lowest share of holidaymakers with 60% of people having holiday plans this summer in Poland and 59% in Portugal.

The phenomenon of stabilization at a high level is even reinforced in the United States and in Brazil, where holiday plans are 2 points higher than last year at 68%.

In Asia, where the barometer is conducted for the first time, proportions are quite the same as in other countries: 67% of the Chinese and 64% of the Indians intend to take a leave this summer.

The proportion of holidaymakers is particularly high among the Millennials: 67% of Europeans under 35 y. o. - and even 70% of those between 18 and 24 y.o. - want to take summer holidays, compared to 63% of elders. In the USA, Brazil and China, we observe the same contrast between Millennials and the elders but in India, it is the contrary: the intent to leave for summer holidays is lower among the younger than among the elders: 59% for Millennials vs. 69% for people above 35 y.o.

After a great decrease last year, the summer holiday duration remains below 2 weeks, except for France, Switzerland and Brazil

The high level of holidaymakers this year goes with a stability in trips duration: it remains below 2 weeks as it was last year. It is in Asia and in the Anglo-saxons countries that the average duration is the lowest: only 1,3 weeks on average in India and China, 1,5 weeks in the USA and 1,6 in UK. On the contrary, Brazil, France and Switzerland record the highest average duration: equal to 2 weeks in the two European countries, and even more in Brazil with 2,2 weeks.

Asians holidaymakers are much more spontaneous: 65% of Indians and 81% of Chinese book their summer holidays less than 4 months in advance.

The average budget remains stable overall, with a few exceptions

In 2018, budget is still the number one decision making factor for Europeans when it comes to choosing a destination, as 52% of them consider it an essential factor. This year, the average budget reported by Europeans for their summer holiday is €1,957.

In the same trend as summer holiday plans and average duration, the average budget is quite stable compared to last year (-2%); hiding some contrasts depending on the country.

Traditional holidays are still the majority: domestic holidays and seaside destination attract most holidaymakers, who mostly pick destinations where they have already been

In 2018, holiday practices are still quite traditional as the vast majority of holidaymakers consider mostly domestic holidays: In Europe, the top destination is always one’s own country, France being the champion – even with a 6pts decrease: 57% of French holidaymakers will go on holidays in France this summer. Spain and Italy are following shortly with respectively 56% and 52% of their holidaymakers staying in the country for the summer. Two countries are the exception and favour neighbour countries: the Belgians prefer to go on holidays in France (34%) rather than in their own country (16%) while the Swiss would rather go to Italy (25%) than staying in Switzerland (20%).

When it comes to travelling outside of their own country, Europeans keep favouring the same top 3: Spain, France and Italy.

Across the Atlantic, Americans also opt for their own country first (46% of them) as well as Brazilians (33%). In Asia, one’s own country is also the top destination: About one third of the Chinese (32%) and a quarter of the Indians (25%) plan to go on holidays in their own country.

But no matter the destination country, seaside remains the top destination for all interviewed countries, to various levels: 70% of the Italians, 68% of the Chinese, 67% of the Austrians, 65% of the Germans, 64% of the Spanish, 62% of the Swiss, 61% of the French, 59% of the Polish, 58% of the Portuguese, 57% of the Belgians and the British, 50% of the Brazilians 48% of the Indians and 43% of the Americans intend to go on holidays to the seaside this summer.

When asked the reasons motivating the choice of the destination, Europeans holidaymakers are quite conservative as the first reason is that they have already been there. Austrians are the champions with 44% of them making it a choice criteria.

Across the Atlantic, having friends or family there is the first motivation for picking a holiday destination (for 27% of Americans and 21% of Brazilians).

In China, proposed activities prevail for 36% of the holidaymakers and in India recommendation is the first choice criteria (mentioned by 25% of holidaymakers).

… but touring is trending

Even if traditional holidays are the majority with domestic destinations, a preference for seaside and already known places, touring to discover new things is a practice that is gaining ground: this year, 22% of Italians intend to go on a tour, which is a 5pts increase vs last year. It is also quite high among Brazilian holidaymakers (40%), as well as Indian and Chinese ones (respectively 42% and 47%).

When it comes to being connected during the holidays – be it to work or to social networks- the attitude of Europeans and non-Europeans vary greatly.

Most Europeans intend to disconnect completely from work during their holidays, especially the British (71% of them) and the French (70% of them), whereas Asians will mostly remain connected to work: 60% of the Chinese and of the Indians will not disconnect from work.

Once again this year, holidaymakers express a strong enthusiasm towards unusual accommodations and experiences.

When choosing their holiday activities, they are also more sensitive to new environmental and cultural experiences: This is particularly the case among the European, American and Indian Millennials, as respectively 59% (vs 53% in the general population), 83% (vs 67%) and 81% (vs 70%) of them already tried at least one atypical activity (such as primitive camping, taking part in solidarity tourism or going on an ecological trip).

As they are important social media users, Millennials also tend to post more online reviews after their holiday about the services they used (hotels, restaurants, airlines, …). This habit is mostly popular in Asia: 96% of the Chinese and 95% of the Indians (vs 93% and 92% in the general population) post reviews.

The dream holidays: a collective imagination

Holidaymakers share a common vision of their dream holidays and of the cities they would like to visit at least once in their life.

Europeans, Americans and Asians consider New York, Paris and London as part of the top 4 locations they wish to travel to someday.

In addition to these common idealized cities, European and Americans also dream of visiting Rome, while the 3 remaining countries, that are quite vast, include cities from their own country in their top destinations: Brazilians mention Rio de Janeiro in fourth position, the Chinese mention Beijing in second position and Indians mention New Delhi in fourth position.

When it comes to country image, Europeans and Americans often share the same vision. Other nationalities mostly choose their own country as the most representative of the different topics:

Italy is also considered as the country with the best heritage by Europeans and Americans (most culturally rich, with the best food and the most historical), when holidaymakers from the 3 other countries (Brazilians, Indians and Chinese) favor their own country on these topics.

Finally, when it comes to the atmosphere of a country (the most relaxing, the most welcoming, and the cheapest to visit) holidaymakers are rather considering their own country as the most relevant.

Brexit may have an impact on the consideration to visit

Conducted by Ipsos at the request of Europ Assistance on a sample of 16,000 individuals in Europe (France, Germany, Italy, Spain, Belgium, Austria, United Kingdom, Switzerland and, for the first time this year, Poland and Portugal), in Asia (India and China, both for the first time this year) and in America (United States and Brazil), the aim of this reference survey – carried out by Internet and published for the 18th year running – is to offer an annual estimate of the holiday plans of the citizens of the countries in question, in addition to their motivations, destinations and preferred types of trip.